Rainforests are the most diverse, complex, and imperiled terrestrial ecosystems on Earth. Despite their critical importance to the livelihoods of local communities, harboring immense biodiversity, regulating climate, and being the origin of most modern medicines, rainforests are undervalued, understudied, and overexploited.

The Rainforest is dense, vast, and home to notoriously harsh environmental conditions, all presenting barriers for current technology and research. The 5-year $10M XPRIZE Rainforest attempts to solve this problem by improving our understanding of rainforest ecosystems. The competition is challenging teams to integrate current and emerging technology such as data science, artificial intelligence, machine learning, robotics, and remote sensing to survey biodiversity in multiple stories of the rainforest and to use data to deliver insights in near real-time that will reveal the true value of standing forests, ultimately leading to their sustainable use and preservation globally.

The ability to leverage new tools to survey rainforest biodiversity in harsh environmental conditions and apply data to rapidly produce new insights in unprecedented detail will lead to scalable technological innovations, new scientific discoveries, and support the sustainable use and well-being of standing rainforests for the benefit of humanity. 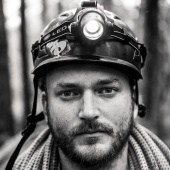 Peter Houlihan specializes in planning and leading expeditions into understudied and threatened rainforests all over the world for conservation. Regularly operating in more than 20 countries across Africa, the Americas, and Asia, Peter is passionate about working with local scientists and communities, and inspiring others to learn about our natural world. He has lived and worked extensively throughout the tropics, where he has led nearly 50 large scale expeditions and managed long term conservation programs, particularly in Borneo, Madagascar, the Amazon, Central America, and the Congo Basin. A tropical ecologist and conservation scientist by training, Peter is a Senior Research Fellow with UCLA’s Center for Tropical Research, a frequent visiting scientist at the Smithsonian Tropical Research Institute in Panama, International Advisor for the Borneo Nature Foundation, and an Adjunct Professor for Johns Hopkins University instructing international graduate level field courses in tropical ecology and conservation.

Globally, Peter's research, conservation work, and science communication have helped lead to the establishment of new protected areas and the documentation of species new to science. As a multilingual photographer, videographer, and producer, Peter fuses conservation science with high-impact media to inform broad international audiences about our planet. On camera, Peter has appeared alongside Sir David Attenborough in a BAFTA-nominated series for the BBC, across National Geographic platforms, and in an Emmy-nominated PBS documentary. A recent film about his scientific research in the Florida Everglades has received many accolades as an Official Selection of numerous film festivals. Peter is also a National Geographic Explorer, Photographer, and Expeditions Expert, a Fellow of the Explorers Club, and a gear tester for Patagonia.